Natalie Collins tucked a strand of brown hair behind her ear as she shuffled down the hall. How on earth did she manage to get a job at Pandora Productions? Tall, swanky women and beyond-gorgeous men strode down the hall as if on a catwalk. It was hard not to gawk. Her conservative black pantsuit paled in comparison to the rainbow of colors.

The corner of a binder bit into her side. She shifted the two overstuffed binders, trying to balance them. Her glasses slipped down to the tip of her nose again. Of all the rotten luck, to have one of her contacts rip the day before the replacements arrived. Leaning her shoulders back, she tipped her head and tried to wiggle her glasses back in place. She shifted her load again to keep them from falling and ran into a wall.

Her glasses slid to the floor, but she kept hold of the binders. After steadying herself, she glared at the wall. Only the blob in front of her definitely wasn’t a wall.

Oh, no, she’d run into someone, probably disrupting their strutting.

A hand gripped her elbow. “Are you all right?” The deep voice caused shivers to course down her back. “Let me take those.”

The weight of the binders was lifted from her and she squinted to try to make the man in front of her come into focus. “I… I’m fine. I just lost my glasses.”

“How very Velma of you,” the voice said followed by a chuckle.

The voice sounded so familiar, and Natalie’s stomach started twisting. What if it was… no, it couldn’t be. She heard the thud of her binders on a counter. The man blob stooped down briefly.

Her heart sank as the glasses brought the face of her rescuer into sharp focus. Chase Booker. Unruly, sun-kissed blonde hair fell on a face that angels would envy. Brilliant green eyes sparkled with amusement. A fan girl she was not. A squealing teenager she was not. A hot blooded woman she unfortunately was.

So much for hoping he wouldn’t be as attractive in person. She realized her mouth was agape and he’d put her glasses on her. A little piece inside of her trilled in happiness as his knuckles brushed her cheek.

Hot waves of embarrassment came up quickly, making her face burn. She closed her mouth. “Thank you, Mr. Booker. I’m terribly sorry I ran into you. I hope I didn’t hurt you.” Oh, somebody stop her from talking. Maybe the wall would open up and swallow her whole.

“No problem. Let me help you carry these.”

“No, I’ve got it. Really.” She tried to get there first and bumped up against his side. She knew from his last movie exactly how ripped that side was and the rebellious little piece inside her squealed in delight. She was really going to have to have a talk with herself when she got out of this.

He could pretty much insist on anything with that face and that body and get it. Her face was probably as red as a beet by now. She dropped her gaze and backed away.

His smile took her breath away. “So where am I taking these?” He held the binders with one arm. His eyes met hers and she had to resist the urge to sigh.

She knew why so many leading ladies went out with him. One look from those emerald eyes and they were a goner. She fussed with an imaginary piece of lint to break the contact. “To accounting. My desk is outside Mr. Morrison’s.”

“You’re new to Pandora Productions.” It was a statement of fact, so Natalie wasn’t sure she was supposed to answer. He led the way down the corridor.

Natalie fought to keep her gaze on his broad shoulders and off his legendary butt. Also very prominent in his last film. She cleared her throat. “Accountant. I’m the new accountant.”

He set the books on the desk and turned back to her. Could beauty blind? He held out his hand. “Welcome on board.”

She took his hand and a pulse ran through her. Would she ever get her face to stop burning? Probably not with him around. “Thank you, Mr. Booker.”

“Call me Chase.” He released her hand.

Had he held her hand a little longer than normal?

She gripped her own hands together tightly. Attraction to a magnificent man was perfectly normal. She would definitely get over it after working with him for a while. After all, he was probably spoiled, used to getting what he wanted, overbearing, and his eyes were gorgeous. She had to snap out of it. “Thank you… Chase.”

He smiled again and she could have sworn she saw a spark of interest in his eyes. Not possible.

“I look forward to working with you…”

“Natalie.” The word rolled off his tongue like a caress. Her knees turned to jelly. It was one thing to drool over him in a movie, but to drool on her boss wasn’t professional at all and not a good way to start a business relationship.

She had better get over this quick. 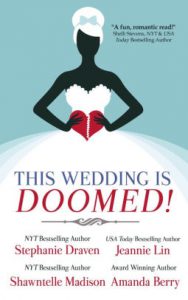